Enter your City name or Pincode

Karauli is a city in the Indian state of Rajasthan and serves as the district headquarters of Karauli district. The town is famous for popular red stone and is one of the holiest cities in India. There are more than 300 temples in the city that are frequently visited by people making it a popular tourist destination in Rajasthan. The district is divided into 7 tehsils, 6 subdivisions, 223 panchayats, 881 villages, 5 panchayat samiti, 2 Nagar Parishad and 1 Nagarpalika. There is a red sandstone wall constructed around the city to protect it. There are gateways built in the wall at strategic locations to protect from the approaching enemy in the olden days. 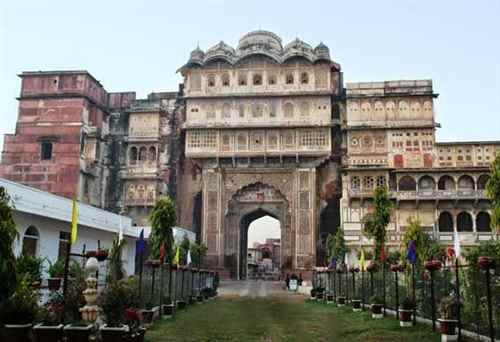 Reaching Karauli is quite easy with good connectivity of the city through road, rail and air. The road network connects the city to all major cities of Rajasthan and rest of India. There are frequent government and private buses plying on different routes. One can even hire a taxi to reach here.  Hindaun City (HAN), Shri Mahaveer Ji (SMVJ) and Gangapur City are the major railway junctions that connect to Karauli. If one prefers to hop on a flight, Jaipur Sanganer Airport is the nearest airport located around 170 KM from Karauli.

Karauli was a part of Matsya Kingdom along with Alwar before 11th century. The modern princely state of Karauli was initially founded by Raja Bijai Pal, a Jadon Rajput, in 995. It is believed that he was the 88th in descent of Lord Krishna. On the other hand, it is also believed that Maharaja Arjun Dev founded the princely state of Karauli in 1348. It was in 1818 that the region came under direct rule of the Rajputana Agency before which it was an independent principality. The Britishers later occupied it and ruled till 1947. There are many forts and fortresses built here by different rulers adding to dignity of the town.

Meena and Gurjer castes dominate Karauli today, the local languages being Hindi and Rajasthani. It is a holy city famous for hundreds of ancient temples. The city is quite hot in May - June with the highest recorded temperature of 49 °C. It is advisable to visit the city during the months of March - April when the annual fair is conducted at Kaila Devi temple. One can even plan to visit here from June - September which is relatively a rainy season with a very pleasant weather. As per the census of 2011, district had a population of 1,458,248 with population density of 264 persons per square KM. The average literacy rate in the district is 53% which is quite lower than the national average. Around 30% of the total district area happens to be forest.

The economy of Karauli is majorly based on agriculture along with some small scale mining operations. Major minerals found in the district are sandstone, Missionary stone, Silica sand, Soapstone and White clay. There are close to 200 small units here that are involved in using sandstone for cutting and polishing of stones to be used in building making.

The heritage city of Karauli is home to many forts and historical monuments that are worth visiting. One can experience historical paintings and embedded art adding to glory of these monuments.

The fort is situated in Masalpur village, around 42 KM from the district headquarters. The fort was constructed by Yadhuvanshi ruler Timanpal in 1244. There are many ancient archaeological sculptures here that truly speak about the craftsmanship. There are unique 5 feet wide and 30 feet high ramparts around the fort. The entry gate has a statue of Lord Ganesha and Bhramha. There are also portraits of ghost and demon that can be seen here. It seems that the fort housed a whole city comprising market, garden, temples, rooms and well; the remains of which can still be found today. There are many small rooms inside the fort that were probably used as bathrooms.

This fort is situated on a small hill, 40 KM south of Karauli between the mountain ranges, and made of red stone. The fort was acquired by Maharaja Arjun Dev in 1327 AD and it remained under the custodianship of Karauli dynasty afterwards. The fort is very important with respect to its location being very near to Gwalior. One can experience direct sunlight here from sunrise to sunset in the Surja Pol of Fort.

The fort is located in a tunnel shaped high mountain range of Kalyanpura village in Karanpur and was established in 15th century. The fort remained in possession of Yadhuvanshi rulers till the last Mughal Empire. Spread in an area of 4 KM< fort has a 100 feet high waterfall that directly drops water over a Shivlinga. Shilajit is found in large quantity in this water. The fort was considered key to Gwalior when Sikander Lodhi attacked here in 1506-07.

This fort is located on the banks of Chambal River on the east of Unt Giri. The fort was largely destroyed during the attacks of Sikander Lodhi in 1506-07. Today it has one Bavdi, creaky stone scriptures and remains of the mansion. There are many historical events that this fort has witnessed.

The fort was constructed by Nagraj, son of Yadhuvanshi King Timanpal and was expanded through the years 1566 to 1644. It is an unique example of Mughal architecture and located 15 KM away from Karauli on Mandrayal route. The popular fort houses double storeyed Nrip Gopal Bhawan, Saheliyon Ki Bavdi, Artistic Jharokha, 18 feet long girder of common and VIP courts, Panchveer and Magadh Rai Ki Chhatri. The ruler of Jaipur, Sawai Jai Singh, also resided in this fort for three months.

It is a Hindu temple located on the banks of Kalisil River, a tributary of the Banas River. The temple is situated around 23 KM from Karauli and is a marble structure with a large courtyard of checkered floor. Dedicated to Kaili Devi, a tutelary deity of the erstwhile princely Jadaun Rajput rulers of the Karauli state, the temple is frequently visited by people. There are a large number of red flags planted here by devotees. There is a famous fair that happens here every year in the months of March - April. The temple has two idols that are quite old and idol of Goddess Kaila Devi is slightly reclined as neck of the Goddess is bend. The temple truly speaks about the great medieval architecture with the ornamental work, engraving on the walls.

There are many other popular temples in and around that are frequently visited by pilgrims including Madan Mohan Ji Temple, Mehandipur Balaji Temple, Shri Mahavir Ji Temple and Gomti Dham. It is also common among the tourists to explore rich cultural heritage of the region with its countless forts including Fatehpur Fort, Fort Narauli Dang, Bhanwarvillas Palace, Ramthara Fort, Harsukh Villas, Rawal Palace, Shahar Quilla and many more.


Utilities and Services of Karauli

Today Karauli boasts about providing all kinds of modern facilities to locals and tourists.

Are you a Business Owner?

Add the products or services you offer